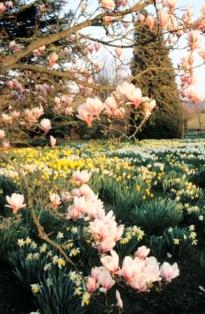 Mote Park is set in 450 acres of historic parkland and is one of the largest public parks in the south-east. It was designed for Lord Romney in the late 18th, early 19th century, and the original designed landscape remains virtually intact, with a large lake, cascades, pavilion and boat-house. In 2009, the Heritage Lottery Fund awarded £1.8m for the park's restoration and improvement.

Mount Ephraim Gardens is set in ten glorious acres of stunning Edwardian terraced gardens against a backdrop of the beautiful Kent countryside. The gardens were laid out in the early 1900s, and were restored in the 1950s after suffering years of neglect. The elaborate and unusual topiary, with a miscellany` of birds, animals and First World War memorabilia in clipped yew, truly captures the imagination. The Millennium Rose Garden abundant with scented roses and a traditional herbaceous border complete this stunning area. The gardens also feature a Japanese rock garden, water garden and lake, arboretum and a spectacular grass maze with a play area for children. It is a place of tranquillity and charm so often lost in larger more impersonal gardens.