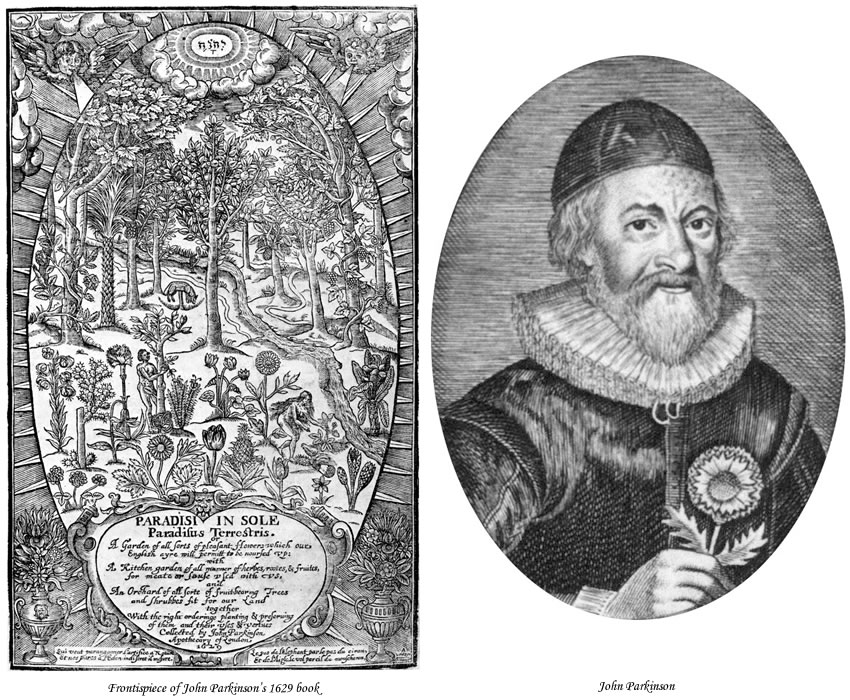 The Roses in John Parkinson's Paradisus Terrestris of 1629

The following article is from the Journal of the Historic Roses Group and is by Kent Gardens Trust trustee Tom La Dell. Tom refurbished the Archbishop's Palace Garden in Maidstone with the help of a grant from Entrust and manages the garden for KGT. The choice of plants is from those in John Parkinson's Paradisus Terrestris.

For more information about the Historic Roses Group see – www.historicroses.org

John Parkinson published his Paradisus Terrestris in 1629 after a lifetime of collecting and assessing plants. He was an Apothecary and a leading member of the Worshipful Society of Apothecaries. He was also one of the first to include plants for their ornamental garden value, making it more than just a ‘Herbal’. On the title page he declares that his book is:

‘A garden of all sorts of pleasant flowers which our English ayre will permit to be noursed up: with a Kitchen garden of all manner of herbes, rootes and fruites for meate or sauce and an Orchard of all sorte of fruitbearing trees and shrubbes fit for our Land, together with the right orderinge planting and preserving of them and their uses and vertues.’

His ‘all sorts of pleasant flowers’ includes descriptions of 30 roses under 24 headings with 14 of them illustrated in two pages of woodcut illustrations. The challenge to identify these arose from planting the garden in the remains of the medieval Archbishop's Palace garden in Maidstone for Kent Gardens Trust. After 25 years the time came to refurbish it as the original ‘apothecaries garden’ was tired and in fact looked more like an Arts and Crafts herb garden. As the main palace building is a Registry Office it also seemed to be a good idea to include more flowering plants as a backdrop for the wedding photographs. Parkinson was clearly our man, even though he is a little later than when the Archbishops were in residence on their very comfortable travels between Westminster and Canterbury. Most of his plants would have been known long before he wrote about them.

The Archbishop’s Palace Garden with The Apothecary’s Rose, Rosa gallica Officinalis in the foreground, which was certainly cultivated in Roman times

Fruit trees for spring blossom and roses to follow was clearly a good move amongst the surprising range of ornamentals known to Parkinson.

Parkinson says that ‘The White Rose is of two kindes, the one more thicke and double than the other: The one riseth up in some shadowy places, unto eight or ten foote high with a stock of great bignesse for a Rose. The other seldome higher than a Damaske Rose’. As the leaves are ‘somewhat smaller and whiter greene’ than other roses it is clear that these are alba Semi-plena and alba Maxima.

This rose is: ‘…in most things like into the lesser white rose, both for the growing of the stocke, the bignesse of the flower, but that it is more spreade abroade when it is blown then the white rose is, and is of a pale blush colour….’. Could this be alba Maiden's Blush?

The description is a little confusing as it is ‘never groweth so high as the damaske Rose bush’ and the flowers are ‘orient, red or deepe crimson colour. This rose being well dryed and well kept, will hold both colour and sent….’. In his introductory paragraph to the roses Parkinson says that ‘I will therefore beginne with the most ancient and knowne Roses to our Countrey….’ So it is safe to deduce that this is gallica Officinalis. 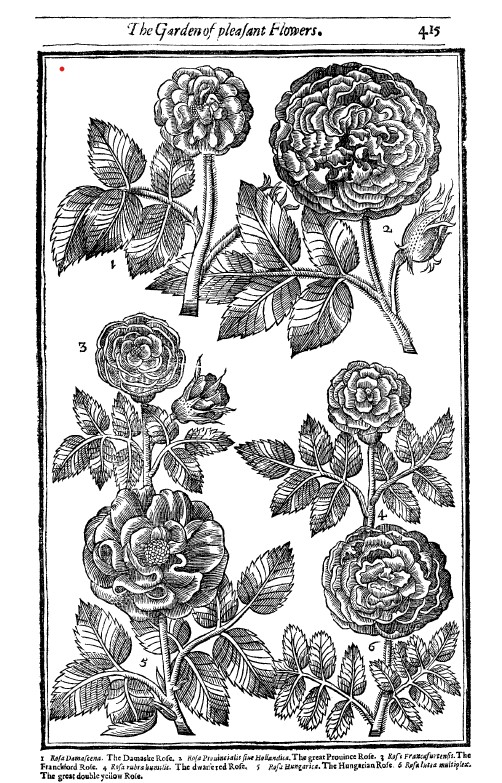 The original damask rose is obviously much loved and the description is short as the flowers are a ‘fine deep blush colour, as all know’ with ‘the most excellent sweet pleasant sent, far surpassing all other Roses or Flowers….’'. Parkinson's damask must have been one of the varieties grown for Attar of Roses in Eastern Europe and West Asia. Figure 415/1.

‘…some call Centifolia Batavica incarnata’. Parkinson's naming reflects the confusion there has been about the origins of centifolia roses and is what he seems to describe. He compares it to a damask rose but it is deeper pink ‘… but much thicker, broader, and more double, or fuller of leaves [petals] by three parts almost, the outer leaves turning themselves backe, when the flower has stood long blowne, the middle part it selfe…. Being folded hard with small leaves….’ and scented like a damask rose. Figure 415/2.

‘… this is called Batavica centifolia rubra, the difference being not very great’. 'Centifolia' creeps in here so this must be a red centifolia.

Rosa versicolor – The party coloured Rose, of some York and Lancaster

‘This Rose in the forme and order of the growing, is nearest unto the ordinary damaske rose’. Clearly our damask York and Lancaster.

‘This Rose is very like unto the last described’ but is ‘striped and marked with a deeper blush or red, upon the pale coloured leafe [petal]’ but it did not seem to flower well. Probably a lost damask rose.

‘This Rose groweth alwayes low and small, otherwise in most respects like unto the ordinary redde Rose….’. The flowers are ‘double, thicke, small and close’. Parkinson makes it clear that he looks at them ‘as they grew in my garden.’. We know that his garden was on Longacre, on the edge of Covent Garden and that he was a skilled cultivator of plants. This could be a small gallica but, maybe, is Pompon de Bourgogne or a rose that is small in flower, leaf and growth. It is now usually classified as a centifolia but looks more like gallica. Figure 415/4.

A probable cross between a gallica rose and Rosa majalis (R. cinnamonea), most of the varieties have died out but Empress Josephine may be this rose or belong to this group. Figure 415/3.

Parkinson likens this rose to the ‘red rose’ and it is paler and ‘beeing neerley looked upon is finely spotted with faint spots, as it were spreade over the red.’. Clearly an old spotted gallica. Figure 415/5.

These are ‘a very deepe red crimson colour like unto crimson velvet’ and varieties of gallica roses.Gallica Tuscany is probably an old survivor and maybe the one with sixteen or more petals in a flower. The single one could be gallica Velutinaeflora but this has petals mottled with crimson and pink. Figures 419/3 and 419/4.

The description is rather confusing but the leaves are quite small and the flowers ‘not much bigger than those of the double Cinamon Rose’ and ‘of a pale Rose colour, with divers pale coloured veines through every leafe [petal] of the flower, which has caused some to call it The marbled Rose.’. As with most of the woodcuts of the roses in Parkinson, the illustration does not help much. Could these be the ‘Rosa sine spinis’ of Clusius and Redoute's ‘Frankofurtana Inermis’? Figure 419/1.

‘This single yellow Rose is planted rather for variety than any other good use’. This is the single, wild version of the following.

Parkinson has quite another view off the double form usually called Rosa hemisphaerica but, according to the European Garden Flora, h. Flore Plena. ‘The double yellow rose is of great account, both for the rarity and the doublenesse of the flower.’. It is west Asian species and wants a hot, dry summer and ‘I have lost many my selfe’. Figure 415/6. 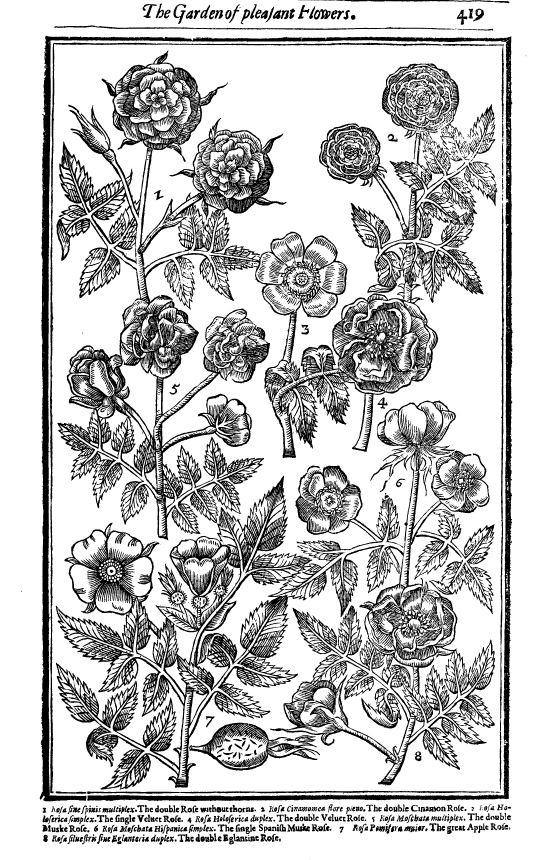 Our Rosa moschata, which is of modest growth compared to R. brunonii or R. mulliganii (which grows over the arbour in the centre of the White Garden at Sissinghurst), and has greyer leaves. They both have ‘a very sweete and pleasing smell, resembling Muske: some there be that have vouched, that the chiefest sent of these roses consisteth not in the leaves [petals], but in the threads [stamens and filaments] of the flowers’. Thus in these species does the scent carry on the air. This is typical of Parkinson's accurate observations from a lifetime of growing plants. The double musk rose of Parkinson is now not clearly identified and more than one variety exists. Rosa moschata Nastarana (which was imported from Persia) is probably close to this. Figure 419/5.

Sounds confusing? Parkinson was too and ‘This flowreth at the time of other Roses, or somewhat later, yet much before the former two sorts of Muske Roses … shew plainly it cannot be the tribe of Musk Roses.’.

This is ‘the height of the Eglantine’ with greener leaves, single sweet scented flowers and early flowering. Another mystery.

The description fits the wild Rosa villosa (R. pomifera) with greyish leaves and deep pink flowers. This is the only hip illustrated in all the 14 woodcuts and it is clearly bristly all over. Figure 419/7.

The description perfectly matches, with ‘being planted in gardens for the sweetnesse of the leaves’, Rosa rubignosa, the eglantine or sweet briar.

The double variety of eglantine seems to have been lost, maybe replaced by the hybrid, Penzance briers and other varieties. It is possible that this is the one called Manning's Blush which was illustrated by Mary Lawrance in her wonderful book of roses in the late 1790s. Figure 419/8.

Still called Rosa sempervirens, this is the evergreen rose of Southern Europe. The plant in my garden is from a cutting of the plants in the ruins of Hadrian's Villa at Tivoli and it would be nice to think that these are descendants of the original Roman garden plants.

Notes on the roses in the garden

Here are some of the many roses grown by Parkinson which are in the garden.

The semi-double form of the wild dog rose, Rosa canina

Rosa gallica is wild in France

Rosa gallica Versicolor or Rosa Mundi is the old striped version of R. gallica Officinalis and was also cultivated in Roman times

The cinnamon rose (the older stems are the colour of cinnamon) is a nice, gently suckering, early flowering rose