We need volunteers who are interested in gardens, horticulture, social and cultural history, local history or archaeology to get involved and help support our work .

The Trust would like to enrol more volunteers who are interested in researching gardens and if you would like to join our enthusiastic team helping to understand more about our garden heritage, please contact us . 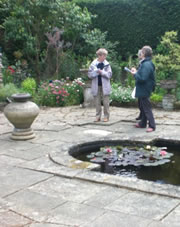 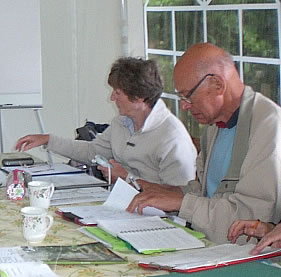 In 2015, Dover District Council commissioned researchers at the Kent Gardens Trust to research several private and public gardens and open spaces. Dover District Council has developed a heritage strategy and the aim of the project was to assess and record the significance of the sites for future strategy reviews and historical records. The following reports give a description of the historic nature, content, current state and significance of each site at the time they were written. There will be a fuller article on the Dover project in this year's Kent Gardens Trust autumn newsletter. See Project Reports.

You will see from our home page that Kent Gardens Trust researchers have written a new, exciting book about Capability Brown's commissions in Kent. The book begins with an introduction which charts the development of eighteenth-century landscape design and draws out key themes from Brown's work in Kent. The book then explores each of the five sites where we know for certain that Brown either designed the landscape or proposed improvements: Ingress, Leeds Abbey, Valence, Chilham Castle and North Cray Place. All the chapters are based on through research and, for Leeds Abbey, Valence and North Cray Place, we have also compiled illustrated reports in our usual Historic England style. See Project Reports.

We have completed a wide-ranging project sponsored by Medway Council. We have reviewed around 30 historic parks and gardens in the Medway area to assess their value and significance. It is a particularly interesting research project as, unlike other projects we have completed recently, most of the gardens are situated in urban areas, and many are open to the public. Research reports have now been put on the website. For example, Eastgate House in Rochester has many historical associations and the garden has several surviving features of the Arts and Crafts garden designed in the 1920s by the renowned architect, Sir Guy Dawber. The garden is open to the public. See Project Reports.

From time to time, we are asked to undertake individual research projects, usually private commissions. These are not linked to a particular local authority sponsored project so are listed separately here. See Project Reports.

We worked with Thanet District Council on a review of the garden enclosure at Dalby Square, documenting its history and development since the early 1870s. The research yielded some very interesting information about the site, including restrictions placed on its use, most importantly that it should always remain an ornamental garden. The final report, with plenty of images, maps and photographs, illustrates just how significant the garden enclosure is. We have also reviewed Hawley Square which has an equally interesting history dating back to the late C18. As with Dalby Square, it is a rare example of its kind in Margate, reflecting in many ways fashionable London garden squares. Both gardens have been significantly altered, but remain valuable community amenities. We have also written a report on the Margate Coastal Park. See Project Reports.

The gardens we researched in the Sevenoaks district vary from a small, 1930s, town garden in Sevenoaks High Street to a large garden surrounding a 17th century house in the country (St.Clere). A number of gardens are associated with famous names such as the early twentieth century garden designer, Gertrude Jekyll (Chart Cottage and Stonepitts) and Octavia Hill, a founder of the National Trust (Larksfield). The socialite, Constance Spry, lived at Parkgate House, whilst the painter Samuel Palmer had associations with Underriver. The father of the English Landscape Movement, Lancelot Capability Brown, carried out work at Valence and the renowned horticulturalist, Sir Harold Hillier, worked at Tanners. Some gardens now provide communal benefit (Hextable Gardens, Swanley Park and Bradbourne Lakes Park); and, at Henden Manor, there is documentary evidence of a late Tudor garden. We began the Sevenoaks project in the Autumn of 2010 with 10 volunteers who had worked in Tunbridge Wells. Fortunately, we quickly recruited others and formed a dedicated team from a variety of backgrounds. See Project Reports.

The volunteers met for the first time at Bedgebury in 2008 to form a research group in order to investigate and describe gardens and parks within the bounds of the Tunbridge Wells Borough Council. Many of the sites date from the C19, such as Bedgebury and Lillesden, with a formal garden near the house set in parkland with still surviving mature trees. Other C19 gardens, for example St Ronans, are superimposed on C18 creations. Glassenbury, a C15 moated house with C18 formal gardens set in woodland, and Sprivers, another C15 house with landscape features dating from the C16, are two of the oldest sites. Other early Wealden houses, Old Wilsley and Brattles Grange, have C20 gardens. In the town are several Decimus Burton (1831-81) houses with their C19 gardens (Bentham Hill House, Blackhurst Park and Salomons Centre) as well as open spaces providing public access for example Grosvenor and Hilbert Recreation Ground, the first municipal park in Tunbridge Wells, dating from 1889. At the Beacon Hotel were the C18 cold baths and later C19 tea gardens while Sherwood Park was, first, the home of Charles Siemens, the founder of the international company, later becoming a Guys Hospital school of dentistry during the 1940s. At Crittenden the plant collector, Ben Tompsett (1915-2000), created a C20 garden and at the Grange, Benenden, Collingwood Ingram (1881-1980) planted his cherry trees together with the rest of his finds. See Project Reports.